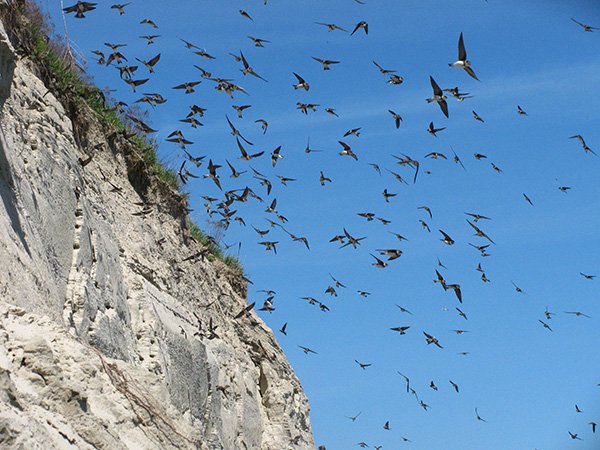 Ontario’s Bank Swallows are small nesting birds that historically make their homes in the sides of eroding cliffs, banks and hills.  Included on the Ontario Species at Risk list, they are considered threatened for several reasons, but primarily due to habitat loss.  Despite the loss of their natural nesting grounds, Bank Swallows have adapted fairly well to human activity and often make nesting colonies at aggregate sites, quarries and open-pit mines.

The Ontario Ministry of Natural Resources and Forestry (MNRF) recently published a Best Management Practices – (BMP) resource for use by the aggregate industry. This document is intended for “the Protection, Creation and Maintenance of Bank Swallow Habitat in Ontario” and provides a set of useful guidelines. These guidelines are not mandatory, but they provide useful tools and information that may help users to comply with federal and provincial legislation (such as the Endangered Species Act).

For example, Bank Swallows receive habitat protection under the Endangered Species Act, which makes it illegal to disturb their nesting sites during the breeding season without regulatory exemption. The BMP document by the MNRF details useful information that can help aggregate site operators to know how to avoid disturbing the nesting sites, what time of year they create their nests, and when it is safe to operate at previous nesting sites.

The MNRF also details methods to deter Bank Swallows from nesting in a given area to avoid having a logistical problem in the hands of aggregate site operators. Some suggestions include ensuring aggregate stockpiles have no vertical slopes, as vertical slopes can be inhabited as quickly as overnight during the breeding season (and once they are, they are federally protected and cannot be disturbed).

The MNRF requires businesses to have experts assess potential nesting grounds and conduct Species at Risk (SAR) assessments should Bank Swallows appear at a site, or if a site operator needs regulatory approval for an activity.  Cambium’s biology team has a wide range of experience dealing with threatened and endangered species in Ontario – give us a call or send us an email to get assistance with your situation.